Report published on the Care Inspectorate inquiry into carer experiences 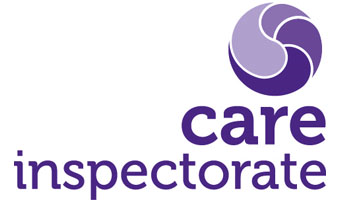 The Care Inspectorate is a scrutiny body which supports improvement in the quality of care in Scotland to ensure it meets high standards. Where they find that improvement is needed, they will support services to make positive changes, including recommendations to underpin that support.

On hearing the Inspectorate’s intention to undertake a National Inquiry into carers’ experiences of adult social work and social care, which included a more detailed scrutiny into 5 Health & Social Care Partnership areas, North Lanarkshire Carers Together campaigned in late February this year, following this intimation, to be one of the areas who volunteered for this detailed scrutiny.

North Lanarkshire Health & Social Care volunteered to take part which was welcomed and we were delighted to lead on this local consultation from April through to June, in partnership with Lanarkshire Carers.

Generally, it is not a good picture for carers across Scotland, but carer’s experiences are better in North Lanarkshire. Of the National Inquiry:

Of the national 1489 carers who took part in the survey, 223 carers took part who live in North Lanarkshire. The differences in carer experiences locally compared to nationally are outlined below: 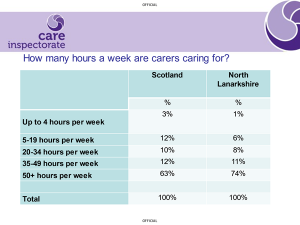 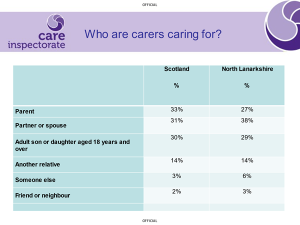 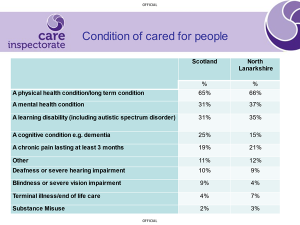 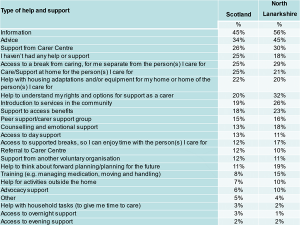 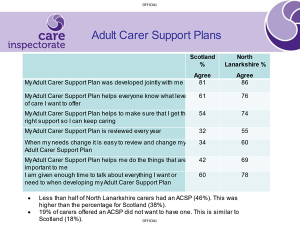 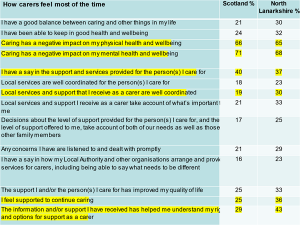 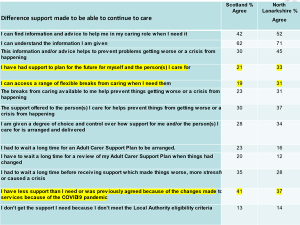 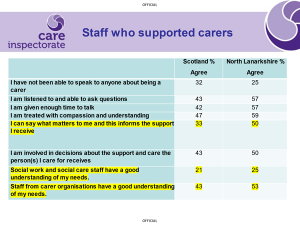 There were good practices locally outlined in the initial feedback, including Lanarkshire Carers BAME service and the Hospital Discharge Support Programme provided by Getting Better Together, however these findings still leave much room for improvement in carers’ experiences of adult services which we will continue to campaign for locally.

The full national report can be found here which includes 8 considerations to support continuous improvement. NLCT have already begun discussions about these with Health & Social Care colleagues and warmly welcome their commitment to them and the wider carer agenda.

A snapshot animation can also be viewed here.

NLCT would like to thank all carers who undertook the Inquiry through the online survey, via a group discussion or with a one-to-one discussion with an Inspector. Your time was very much valued and will help to shape developments locally.